Blue cheese (or bleu cheese) is prized—or distrusted—for its striking appearance and unique aroma. Explore some blue cheese recipes and break the mold!

Blue cheese may be the most misunderstood food in the world. To say it’s an acquired taste is kind of an understatement; kids generally won’t even try it. Even many adults are intimidated by its appearance and smell. They think it’s moldy (actually, it sort of is), and we as humans are taught to stay away from moldy foods because they’re spoiled (in this case, it’s absolutely not; it’s done on purpose and it’s fabulous).

So why is blue cheese blue? What kind of cheese is it? And what about the spelling: it is blue cheese or bleu cheese? Stay tuned—we’ve got the answers. 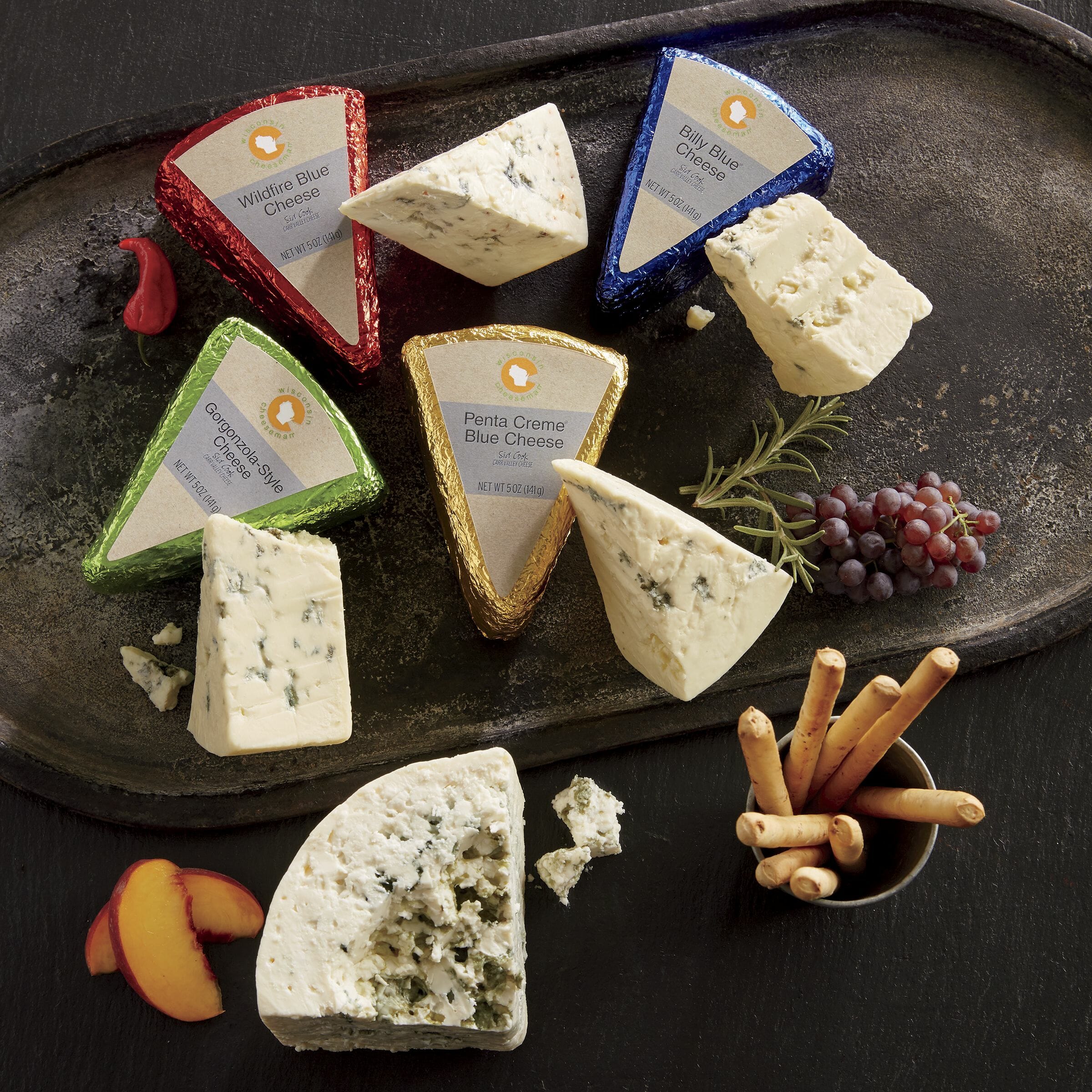 First off, blue cheese isn’t a particular cheese; it’s an entire category of cheeses. It doesn’t even fit neatly into one of the standard types of cheese categorized by texture, as it can fall into several of them. What makes blue cheese blue is the introduction of a mold from the Penicillium genus. Yes, it is a Penicillium mold that produces the antibiotic penicillin…but not the same one. The antibiotic is made from Penicillium chrysogenum; the cheeses are made with Penicillium roqueforti, Penicillium camemberti, and Penicillium glaucum.

You probably noticed a couple of Latinized cheese names there, including one that’s not a type of blue cheese. Camembert and its close cousin, Brie, are known as soft-ripened cheeses. The Penicillium camemberti mold is sprayed onto the surface of each cheese, causing it to develop a soft, white, edible rind and a creamy interior texture. Blue cheese is made quite differently, and there are many different varieties.

Either is correct. Bleu is simply the French spelling of “blue”. There are a number of fromages bleus (blue cheeses) in France, and since the French invented the use of blue cheese in salad dressing, you’re likely to find it spelled as “bleu cheese dressing” at the restaurant…unless they’re specifically serving Roquefort dressing.

Roquefort is one of the most famous of blue cheeses, and the source of the name Penicillium roqueforti. Legend has it that it was discovered when a young man, eating a lunch of cheese and bread in a cave, abandoned it when he was distracted by a beautiful girl in the distance. When he returned months later (he must have been quite distracted), the cheese had turned into Roquefort. No word on the bread, although traditionally the mold was grown by tossing pieces of bread into the caves outside Roquefort-sur-Soulzon, France, until it was consumed by the natural mold in the soil. (Today it’s grown in a lab for greater safety and consistency.) This classic cheese is made from sheep’s milk; the mold is introduced either directly into the curd or through holes poked in the rind during the ripening process.

Gorgonzola is a blue cheese originating in the town of Gorgonzola, in Milan, Italy. Unlike Roquefort, it is made from cow’s milk, and the mold traditionally used is Penicillium glaucum. Gorgonzola also looks different from Roquefort; its characteristic greenish-blue veining is created by the deep insertion and removal of thin metal rods that create air channels in which the mold can travel and branch out. The cheese can be buttery or firm, crumbly and salty. Today it is no longer even made in Gorgonzola, whose farmland was long ago absorbed into Milan’s metropolitan area, but plenty is produced in the surrounding regions of Piedmont and Lombardy.

Stilton is another world-famous blue cheese…or at least Blue Stilton is. (White Stilton, a lesser-known cheese made without the mold, is creamy, open-textured, and used for blending with fruits to make dessert cheeses.) Made in England, Blue Stilton is produced much like Gorgonzola, but the mold used is the more common Penicillium roqueforti. Ironically, it can no longer be made in the Cambridgeshire village that gave it its name; according to its protected designation of origin, it must be made in Derbyshire, Leicestershire, or Nottinghamshire. It is traditionally eaten with port or barley wine.

As the state that produces the most cheese and wins the most cheese awards in America, Wisconsin makes many types of blue cheese—even rivaling the world-famous varieties mentioned above. One particularly creamy Danish-style blue, marketed simply as Wisconsin Blue Cheese, is one of the highest-rated in the state.

Some artisans like to push the envelope and experiment with different styles. Sid Cook, of Carr Valley Cheese, has had exceptional success with this. He produces an award-winning Gorgonzola-style, a super-rich five-cream blue (Brie is usually triple-cream), and another laced with chile peppers. And his Billy Blue—made with goat’s milk—has won numerous awards, including three international First Place awards and two national First Place Awards.

Don’t fear the mold: the mold used in blue cheese, unlike some molds which produce toxins—is safe to consume.

Probably due to the fact that blue cheese mold is related to penicillin, some people believe it helps keep you healthy. We wouldn’t go quite that far, but one British study linked cheese consumption—particularly pungent blue cheese—to the French Paradox. And, of course, cheese is low in carbs and relatively high in protein…and a good source of calcium.

So what does one do with this wonderfully funky cheese?

Our first inclination is to add it (along with some fresh garlic and thyme) to butter for a classic steak topping. Or stir it into mayonnaise to create a quick, zesty spread that will instantly create a gourmet sandwich. Add some chopped green olives to that blue cheese mayo and you’ve got an amazing burger topping.

With just a few added ingredients you can make a blue cheese dressing that’s far better than you’ll find in any bottle. Or combine your favorite blue cheese with smoky bacon in this killer mac and cheese. Speaking of bacon, blue cheese also pairs with pears in this unique breakfast Dutch Baby.

A robust, funky blue cheese is the perfect way to cap off a wine and cheese party. And we do mean you should serve it last in a flight, as its pungent flavor will overwhelm milder cheeses eaten after it. It generally won’t slice neatly, so break it off in large crumbles and serve it with apples, dried fruits, grapes and pears.

The classic blue cheese pairing is a fortified wine like Port or Madeira, but it also does very well with an off-dry white like riesling or gewürztraminer. The best reds are pinot noir (which goes with pretty much everything) and heartier varietals like cabernet sauvignon, malbec, syrah and zinfandel.

No wimpy beers allowed! Serve your blue with a cider or fruit beer (like a cherry kriek), or a hefty porter or stout.

Whether it’s served as a flavorful accent to an entrée or the final crescendo of a cheese course, Wisconsin blue cheese won’t have your guests singing the blues; they’ll be singing your praises.

Got blue? We do! Look here for great Wisconsin blue cheese.

So if you’re allergic to the antibiotic penicillin, can you consume blue cheese without an adverse reaction?

You would really need to consult your health professional. We’re experts in cheese, not medicine. :)

[…] Blue cheese is a generic name, which covers several different varieties of cheese. The common theme is that they are all ripened with cultures of a specific type of mold, named penicillium. And in case you are wondering- yes, it is the same fungus that gave us the world’s first antibiotic! […]

My Chihuahua eats blue cheese all the time with me, and there’s been no changes in her health at all

So which Wisconsin cheese has the taste of Roquefort?

I wouldn’t say any Wisconsin cheese is like Roquefort, which is from a particular region in France and is made from sheep’s milk. Sid Cook from Carr Valley makes an excellent take on Gorgonzola.

[…] a good source of calcium. And some British researchers have theorized that cheese—especially blue cheese—could be part of the famous French Paradox. As with wine, moderation is key. Full-fat Butterkäse […]